You guys remember Jessica Therrien, right? Author of Oppression? Well, she's back and ready for round two!

Today is the cover reveal for her sequel, Uprising, and I'm thrilled to help her celebrate! ♥ Are you ready? 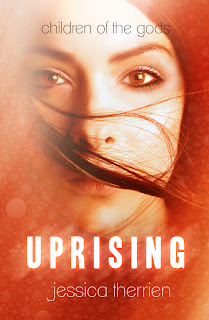 Ta da! How gorgeous is that? It makes me think of the color discussion we had a few weeks ago. :)

We left everything but the weapons. Clothes, food, toothpaste. There wasn’t time for things that weren’t essential to escape. The five of us went on foot in a direction that was meaningless to me. I had never seen what was outside of the edges of the safe haven, not since I’d been here.

When Mac stopped abruptly after our fifteen-minute trek into the woods, we all froze at once, bodies poised and ready to attack, eyes searching for threats.

“We’re here,” Mac announced. “What should we expect Marcus?”

I had never heard Dr. Nickel called by his first name, and it made me realize he wasn’t as untouchable as I had imagined. Just because he was here, didn’t mean we were safe.

“I don’t know,” he answered. “Maybe an army, maybe nothing. Depends on where they are.”

“Everyone best get down on the ground just in case,” Mac decided with a nod. “Weapons ready.”

As I lay belly down in the dirt, I noticed Dr. Nickel pull a gun from his belt, and my stomach gave a heave.

“When I remove the haven walls, there will be a van. Everyone get in back. If anything goes wrong…” Mac paused, uncomfortable at the thought. “It’s been nice knowin’ ya.” 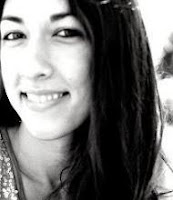 Aside from her Children of the Gods series, Jessica’s work can also be found in a published collection of flash fiction stories called Campaigner Challenges 2011. Out of over 350 submissions her story, The Soulless, won first place for people’s choice and fourth place in the judging round of Rachael Harrie’s Writing Campaign Challenge. Her story, Saved, is also available as part of the anthology.

Jessica spent most of her life in the small town of Chilcoot, California, high up in the Sierra Nevada Mountains. In this town of nearly 100 residents, with no street lights or grocery stores, there was little to do but find ways to be creative. Her mother, the local English teacher, inspired her to do all things artistic, and ultimately instilled in her a love for language.

Jessica currently lives in Chula Vista with her husband and is working on book three in her Children of the Gods series.
Posted by Carrie Butler at Wednesday, August 22, 2012

Ready for the next one!

I really liked that excerpt! Thanks Jessica and Carrie!

Awesome! So happy you liked it, Lydia :)

Thanks Ciara! Congrats on your new book as well!

Thanks for posting the cover, Carrie! I can't wait to see the cover of STRENGTH...I'm DYING to see it. I'm going to have to go back to that color post...what was orange again?

...just looked it up the color thing. Yep...action, fire, energy. Exactly what to expect from this book :) Kind of cool!

So gorgeous! I love it!

I'm so excited for Uprising now! :) No problem, Jessica! I love how it fits in with the whole orange meaning thing. Too cool!

P.S. You won't have to wait much longer for the cover/trailer of Strength. 2.5 weeks! :D

I love the cover! The red contrasts well with the name of the book. I loved Oppressions cover too. Book cover designers are amazing these days. A book does sell a cover. Congrats, Jessica!

Nice of you to help promote others. I love the cover and the excerpt was gripping.

Thanks so much, Julia :)

Thanks Sheena :) Glad you liked it!

I love the cover. I'll have to go back and check out you post on colors.

Gorgeous! I think I like it more than the first one!

Tantalizing teaser. I want to know more. Hope it's a big success, Jessica.

Awesome cover and great excerpt--can't wait to read it:-)

Very nice cover, Jessica. It sort of looks like you.

Great excerpt--and the cover is amazing!

I really do love Jessica's cover, and I wish her good luck with her new book!

I'll second the great cover comments. It's very EYE-catching. Good luck on this one!

I adore it. It's got a washed out, rustic feel to me. So beautiful.

Thanks for stopping by, guys! I couldn't agree with you more. Jessica's cover is gorgeous!

I totally thought dystopian just from the color orange. Then I read the blurb and thought: Carrie is a genius. And: I have to read this book!

Yay! Color cues. I love it. :D Thanks, Melodie!