Hey, guys! It's been a while. How were your holidays? Are you back into the swing of things yet? ;) Two things on the agenda today:

1. I took ten hours over break to revamp my blog design. Do you like it?
2. I'm revealing the cover of HONESTY (Mark of Nexus #2.5) 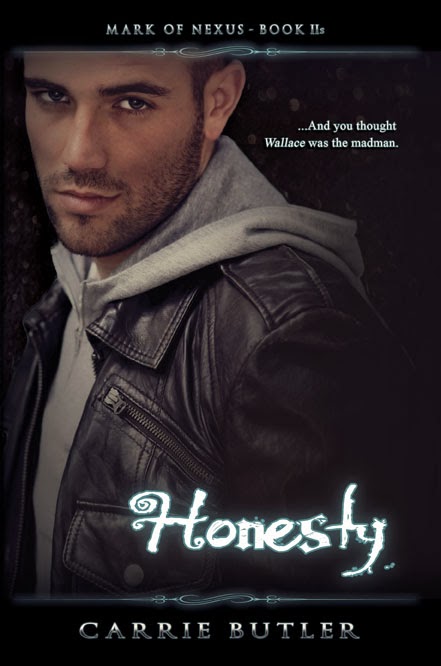 Cole Blake is more than just a roguish ladies’ man. He’s also a dedicated worker—so dedicated, in fact, that he’s willing to blackmail his boss with a falsified sex tape in order to keep his job. And his proactive efforts don’t end there. After hours, he uses his Dynari abilities to moonlight as a vigilante, keeping his neighborhood safe from drunks, dealers, and would-be thieves.

Until a mistake stops him dead in his super-accelerated tracks.

Now burdened with the closest thing he’s ever had to a conscience, Cole struggles to justify his once-reckless actions. It’d be all too easy to give in to his darker impulses, especially with ERA making dangerous advances toward their goal of revolution, but embracing that hatred could jeopardize the few relationships he actually cares about—including his pursuit of the saintly Rachel Ranford. No, in order to keep everyone safe, he’ll have to come clean about his warring compulsions and ask for help... before his dark side consumes him.


Click here to read the first (unedited) chapter of HONESTY!

COMING MARCH of 2014
Want to learn more about HONESTY? Check out its book page!

Question of the Week: What's new in your world?

P.S. I've been having some health issues, so I'm not on top of my game, but I'll try to return comments throughout the week. :)
Posted by Carrie Butler at Monday, January 13, 2014

Oooh. More about Cole. I can't wait! And love the cover. *swoon*

Oh my God, that cover is gorgeous!

Loved it! Remember best line ever? "Oh, we'll beep all right." But I still like my version of ending it with "night". :D I guess I'll use that during our next rendezvous with Chibs and Jax. And thank you Cole for reminding me that yoga is HOT! Now imagine the nude yoga...WITH the top hot. Eh? Eh?

Congrats, Carrie! I love the cover. I'll announce it in follower news next Monday. And I love your blog design, especially how your picture and contact info moves as we move down on the blog post.

I added it to GR! :) What a great cover. The website is very cool.

Congrats, Carrie. You must be so excited.

Hi Carrie, great new blog look and cover reveal! Good luck with everything. Change is good. May 2014 be the best year so far!

What a beautiful man ;) Congratz!

Looks great, both your blog and the cover! Congrats! :D

Congrats, Carrie. I think you have a winner with the cover, hero and storyline.

I really love that cover. Can't wait to read about Cole!
Miss the typewriter, but love the scrolly thingy. :)

I'm calling this one: The Smolder. :D

Dig the blog design, too! I want to touch the screen in a completely appropriate and non-weird way. (Looks like it's got texture, which is cool!)

Oh, and Cole is my favorite! I have a thing for crazy. :)

Congrats Carrie!
Your sidebar is mobile... how cool!
Writer In Transit

Top hats make EVERYTHING better! Actually, so does SOA. Best rendezvous ever! :D

Like the new place! And you've got great taste in covers! :)

New cover great! I do like the new look (though I LOVED your old one too), but to be honest, the bouncy thing going on to the left is very distracting to me . . . but I have the attention span of a brain damaged goat, so don't take my word on it. Anyway . . . what's going on with me? Just working like a dog to prepare for the release of 18 Truths!

I love the set up, honestly I miss the old colour but this looks good too. Congrats on a lovely cover. The man is handsome.

Dude-ette... you be *rocking* with the new blog look... (swear this is true>>>) I clicked on your comment on Morg's site (I'm below you :) and first thing I thought was "NICE!" followed by "how does she do this??" and then I read the first line of the post :)

Well done :) and also honest (me so funny) congrats about the cover reveal.

If you need help promoting the release, just let me know :)

Love the cover! As you know :) The blog design looks great too. Just want to point out that there's some text right under this blog comment field that's black on the black background and you can't see. Otherwise, perfect!

Carrie, I'm soooooo stinkin proud of you and everything you're doing! Love the design and I'm freaking with the cover. All of your book covers ROCK. You are taking this world by storm. <3

Looks great! You're so talented!

Thank you, Natalie! I really appreciate that. :D

CONGRATULATIONS! And the blog is very clean and slick and cool. I love it :) Welcome back!

So glad to have you back and I hope you enjoyed your break :).

As you know I love the cover and was so happy to participate in the Cover reveal :). And I love the new blog design... Amazing job :)

WELCOM BACK! WONDERFUL new cover! ALL THE BEST!

Hope all is well.... It's been ages. I'm having a COFFE HOP today if you need steaming cup to get through your day. With our lovely mid west weather this past few months .... WE ALL NEED a cup to keep warm!

Thank you, Donna! And congrats to you, too. :D

I don't know why people move on from blogger to some boring websites. You've shown what versatile things can be done on your blogspot.

Upgrades!!
I dig it. Any effort spent re-inventing is never wasted as far as I'm concerned. I'm currently doing my share of inventing for 2 WIP websites... To be announced.
My wife up and decided to read my book. Therefore I had to stall buying her yours. I had a feeling that yours would be way more up her alley than mine and didn't want to risk derailing her interest in my story :) You understand. She's on book one (Strength) now and enjoying it thoroughly.

Thanks, Goddess of Grammar! I'm sure I'll recycle the typewriter again someday. I saved it. ;)

Hah! That's a perfect label for it.

Thank you, my friend! I made the background texture online. :)

Congrats on your new cover!

No, I know what you mean. These posts were just getting so long that it really helped me to have the navigation follow. We'll see how long I stick with it. ;)

Thanks, Sheena-kay! I may mix it up and find a way to combine both designs in a few months. :)

Thanks, Mark! I appreciate it. :D

Thank you! I'll screw around in the HTML later to find that trouble spot on the footer. :)

Thank you so much, Morgan! *hug*

Thank you, Kanettra! I appreciate it. :D

Don't tell anyone, but I only drink coffee like once a week. *whispers* And when I do, it's decaf...

Hey, I can't blame you there. It's great that she read your book. Although, I hate to hate to follow that act! I'm glad she's enjoying Strength. :)