Today, I have a good friend (and client) over to share some things she learned while researching her novel, REMOVED. Take it away, S.J.!

The Hero's Journey and
the Art of Japanese Swordsmanship

When I sat down to write REMOVED, I knew I would have to challenge my heroine, Sanaa, in several ways throughout the book and the entire series. Have you ever heard of Joseph Campbell? I’ve only recently become familiar with him and his work. Campbell was an English scholar and mythologist who wrote the non-fiction book, The Hero with a Thousand Faces. In it he describes a “monomyth” or a hero’s journey that exists in many seminal works of fiction (I highly recommend you read that Wikipedia article. It is fascinating). Some of the stages of the journey are present in most ancient and modern tales and even George Lucas has cited Joseph Campbell as influencing the Star Wars trilogy. 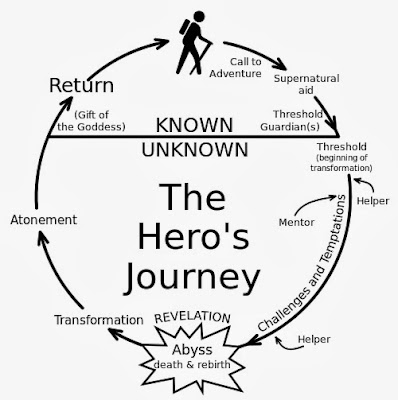 Sanaa, my heroine in REMOVED, also embarks on a hero’s journey at the beginning of this quartet of books. She is removed from her job (this is her “Call to Adventure”) and tasked to watch the main players of her city which will eventually be an important part of her life. In the infographic above, she makes it through her first challenge of accurately watching the clans with the help of her mentor, Mark Sakai, and then her second challenge is to learn sword fighting with Jiro, her helper (who is also someone she’s got the hots for).
Sword fighting is quite a challenge for someone who has never done it. I have never held a sword in my hand or even practiced any martial arts, so this required a lot of research for me. I purchased a lot of books, visited a lot of websites, and watched a lot of videos on Youtube before deciding on my plan for Sanaa’s education. 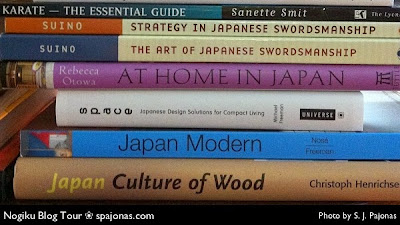 I gave Sanaa a background in karate first since I felt like she needed some self-defense skills before stepping onto the stage of REMOVED. For her, karate was just exercise and a chance to socialize with other people, and she has practiced since she was a young age. But sword fighting is a completely different story. For REMOVED, I chose iaido [pronounced ee-eye-ee-doe] which is “the art of drawing the Japanese sword.” 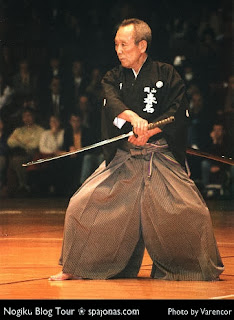 It’s not a fast-paced clashing of swords like kendo is. Iaido is slow and deliberate, each movement with the sword perfectly timed and executed. Learning the basic moves (or kata) of iaido becomes the foundation of a broader knowledge of how to fight with a sword. Most beginners use a wooden sword for practicing, and, when Sanaa sees the wooden swords for the first time, she knows she’s stepped into something life-altering. Jiro, Sanaa’s helper and her love interest, has been studying all types of sword play his entire life, so he’s the perfect person to teach Sanaa. When he places the sword in her hand for the first time, they’re bonded by something supernatural, both of them changed by the action.
This video shows the basic 13 kata of iaido. It’s a bit long at 10 minutes, but if you watch just the first minute or so, you’ll get the idea. Iaido kata are programmed, the very movements ancient in origin. Once these basic moves are learned, masters can expand on them to include two swords (a katana and wakizashi) and/or combine many kata together instinctively in a fight.


Of course, REMOVED is a romance, so the tension between Sanaa and Jiro during her iaido lessons is fraught with conflicting feelings. She loves it when Jiro guides her arms into the correct positions but is then embarrassed when he criticizes her. Jiro wants to be professional and so does Sanaa but they can’t help but both look forward to her lessons and their time together. Iaido, while challenging for Sanaa, becomes a basis upon which their relationship grows. As she progresses through the kata from simple to most difficult, we learn more about her, her strengths and weaknesses, and eventually how capable she is of continuing on her journey.
Iaido also becomes a skill that she puts in her back pocket for use at a later time because once this challenge is overcome another presents itself almost immediately. But that’s life! Especially on the hero’s journey.
Can you identify the hero’s journey in some of your favorite stories? What are the challenges your hero or heroine must face before being allowed to continue on the hero’s journey?

S. J. Pajonas loves all things Asian and has been in love with Japan for as long as she can remember. Writing about Asia and Japan came naturally after studying the culture and language for over fifteen years. She studied film and screenwriting first and eventually segued into fiction once she was no longer working a full-time job.

Released is S. J. Pajonas’s second work, book two of four in the Nogiku Series. The first book in the series, Removed, is described as “a wonderful story” with “engaging characters, seamless world building, and an action packed plot.” It’s an “up-til-3am-because-I-read-it-in-one-sitting book.” She also writes contemporary romance and her upcoming first book in the Love in the Digital Age series will be published in 2014.

S. J. lives with her husband and two children just outside of New York City. She loves reading, writing, film, J- and K-dramas, knitting, and astrology. Her favorite author is Haruki Murakami and favorite book is The Wind-up Bird Chronicle.

Duty knows no family. Love has no price. Secrets can cost you everything. Twenty-year-old Sanaa Griffin, a sweet and smart half-Japanese girl, is about to get more than she bargained for when she wishes for love and excitement on New Year’s Eve 3103. Mark Sakai, who knows more about her than any stranger should, thinks Sanaa is the perfect person to spy on the heads of the three biggest Japanese clan leaders in Nishikyo. He wants her to gather enough evidence to keep them from going to war when they land on Earth’s colonization planet, Yusei. Nishikyo, built by the Japanese 300 years ago to house the rest of mankind, is failing and everyone is preparing to leave. Sakai has known Sanaa’s family all her life but she knows nothing of him! And despite all the time they spend together, he keeps his distance from her. Then one day, he brings her to Jiro, his nephew, to learn sword fighting, and it changes her life irrevocably. Between falling in love with Jiro and the information she is gathering on the clans, Sanaa realizes Sakai is holding back secrets about her family and her deceased parents, secrets as to why she was chosen for this job, and learning the truth puts her and all of Nishikyo in danger.


You can watch the trailer--which I designed with S.J.--for Removed here:

Blurb:
**Contains spoilers for those who have not read REMOVED (Book 1)**

Left in the desert to recuperate from her injuries, Sanaa Itami paces the floors and contemplates her mistakes. She trusted too easily, and now people she loved are dead, killed at the hands of men coming to assassinate her. Sanaa feels beaten, but life awaits her at home. While Nishikyo recovers from the earthquake, negotiations for Sanaa's eventual rule on Yusei continue. New allies must be made, new friendships brokered, new skills acquired -- at all costs. Life at the top of the chain is complicated and lonely, though. With relations in Sakai clan rocky and uncertain, Sanaa must learn to trust others again more than she's willing. Who amongst the clans is left holding a grudge? And will the new family Sanaa has found with Jiro support or betray her? From Nishikyo to Yusei, RELEASED, Book TWO of the Nogiku Series, is the second book in a captivating New Adult post-apocalyptic romance series that harnesses the cultures and traditions of Japan and sweeps them into the future between Earth and a faraway land.

There is a tour wide giveaway for the blog tour of the Nogiku series. These are the prizes you can win: Amazon Gift Cards, copies of REMOVED, and eBook copies of two fantastic Japanese books: JAPANESE SOUL COOKING and THE SAKE HANDBOOK. Both will be gifted through either Amazon (kindle) or Barnes&Noble (Nook).

I bet that was fun doing the research. Plan on taking up swordsmanship now?
Congratulations, SJ.

Alex, I so want to learn iaido now! And there's a studio in NYC that offers classes. Maybe someday :)

I truly appreciate the amount of research that went into developing the character(s) and the intricate details of the story so it comes across with authenticity. The story also sounds intense. Very futuristic and suspenseful.
Oh and very much in love with that trailer :-)

Thank you! Writing is really a labor of love and getting it right can be a challenge. Research is most important to authenticity.

Carrie, did a beautiful job on the trailer! I am forever grateful for her patience :) especially with a computer that had a mind of its own.

Sounds like you did a lot of research here to make your story sound authentic. Love Hero Journey stories. Good luck with your book.

Thank you! And I love hero journey stories as well. They're so much fun :)

I love a woman of action. This sounds like a great premise and incorporating the ancient art of Japanese swordsmanship can only add to it.

Congrats and all the best, SJ!

Woohoo! for SJ! Loved reading about some of the things she put into the series to make it culturally immersive as well as cool. (And it sounds like tons of both!) This series is very high up on my TBR list. :)

Thank you, EJ! It has been loads of fun to research and write!

I really enjoyed reading this post. Best of luck, S.J. :)

I just talked about the Hero's Journey with my Language Arts classes today :-)

Loved the guest post from SJ----her work looks ah-mazzzing. And so original. Thanks for having her, Carrie! <3

Thanks everyone for your comments and to Carrie for hosting me!

Sounds like you had a great time researching for this story, which only makes it that much richer for it. Best of luck with your blog tour!

Thank you for stopping by! I love learning things in guest posts. :D

It was my pleasure, Morgan! <3

*eavesdropping and blushing* Thank you!

There is so much more to character development than people ever realize! Best of luck with the launch. Great cover!

Hi there, just stopping by to say how delightful your blog is. Thanks so much for sharing. I have recently found your blog and am now following you, and will visit often. Please stop by my blog and perhaps you would like to follow me also. Have a wonderful day. Hugs, Chris
http://chelencarter-retiredandlovingit.blogspot.ca/

Thank you, Chris! It's great to have you here. :) I will be sure to visit your blog!