Did you know that one of our own had a huge debut this week? That's right. SKY JUMPERS by Pegasus—I mean, Peggy—Eddleman is out! :) 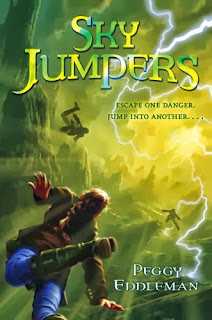 “Adventure and wonder permeate this tale, making it a fun, quick read. Eddleman brings a strong sense of atmosphere, and the underlying message—that it’s possible to contribute in unexpected ways—is a positive one.”

Twelve-year-old Hope lives in White Rock, a town struggling to recover from the green bombs of World War III. The bombs destroyed almost everything that came before, so the skill that matters most in White Rock—sometimes it feels like the only thing that matters—is the ability to invent so that the world can regain some of what it’s lost.

But Hope is terrible at inventing and would much rather sneak off to cliff dive into the Bomb's Breath— the deadly band of air that covers the crater the town lives in— than fail at yet another invention.

When bandits discover that White Rock has invented priceless antibiotics, they invade. The town must choose whether to hand over the medicine and die from disease in the coming months or to die fighting the bandits now. Hope and her friends, Aaren and Brock, might be the only ones who can escape through the Bomb’s Breath and make the dangerous trek over the snow-covered mountain to get help. Inventing won't help them, but the daring and risk-taking that usually gets Hope into trouble might just save them all.

Her book has been all over this week!

I'm heading to her launch tonight. So excited for her!

I can't wait to read this! So good of you to spread the cheery news!

Thanks so much, Carrie! Mwah!

Congrats Peggy! ALL the best! I first saw your story at Sir David King's blog...

We'll live vicariously through you! :)

Read the e-galley and reviewed this excellent book. Even better? Peggy stopped by and thanked me.