Hey, guys! You're in for a special treat today—and by special, I mean potentially dangerous... because Eric is taking over. :D Enjoy!
~ Carrie

P.S. Just remember, I am not responsible for anything he says. LOL

CB: Aww, I love a good suck up answer. ;) In fact, I love it so much I'll post your warning photo for readers to enjoy alongside the longest bio ever. 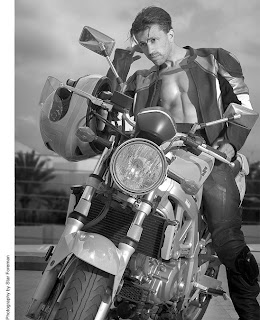 Novelist and author Eric Muss-Barnes was born and raised in Ohio. His grandest literary work to date is an epic 294,000 word vampire duology entitled The Vampire Noctuaries, beginning with The Gothic Rainbow and concluding with Annwn's Maelstrom Festival. He has released a "vocational autobiography" detailing the humorous ups-and-downs leading him from his hometown to Hollywood, in a book entitled How You Can Get a Job at Walt Disney Studios Without a College Degree. In addition to his work at Walt Disney Studios, he has written, directed and produced an award-nominated, critically-acclaimed short-film entitled The Unseelie Court, a movie screened in numerous film festivals across the country and is available on DVD. His writing has been published in numerous magazines around the world and within multiple anthologies, such as Tales From The Dark Tower and The Skateboarder's Journal - Lives on Board, while his professional photography has been exhibited and sold in art galleries from Cleveland to Los Angeles. His second book, entitled Schooling Your Boss To Not Suck, regales amusing tales of unfortunate managers at various jobs he's held over the years while Forever Loving You is the tongue-in-cheek title of his book of poetry and axioms. Eric Muss-Barnes lives in Los Angeles, California.

Eric's Question of the Week: What are some things you feel have changed the most over the years and bring a positive change to the world of publishing?

Lots of changes. I'm very grateful for social media as I wouldn't want to bookstore appearances to be my only option.

lol Great post. Love the suck up to you Carrie. All that he said is true too.

But according to your top five gripes wouldn't your positive #1 still be somewhat connected to your negative #4. People do pay to have crappy books published too.

You gave some interesting pros and cons Eric. And I have to agree that it is sort of sad about the bookstores. Amazon is definitely a huge plus.

I've actually never done a bookstore signing. I've always been afraid of suffering a Spinal Tap moment and no one shows up.

Thank you, Donna. I'm glad it gave you a chuckle. Carrie was kind enough to allow me to post a longer version on my own blog. So, if you'd like the LP version of this EP, check it out at http://www.inkshard.com/10-ways-publishing-has-changed-since-my-97-debut/

My nose is a bit brown for the wear, but it's always good to suck up to your host.

awesome changes that make it possible for the great books that used to get lost in the slush pile to shine.

Absolutely. On-Demand Printing is definitely a contributor to a proliferation of Crappy Self-Published Books. I see On-Demand Printing as a positive tool that can unfortunately be used for evil. Kind of like a CD being used to record a Nicki Minaj album.

Bam- you nailed those changes, for better or worse, spot-on. Self-publishing is two sides of the coin, isn't it?

My son's girlfriend is an engineering intern at Disney World-- almost done with her degree. I may have to check out your book!

Awesome! I love this!

I wonder if there will ever be some sort of sanctuary designed across the world to house the fleeting and endangered bookstore?

And Eric, appreciate the warning :-)

Thank you. Please do check out my Disney book. Working for Walt is the greatest honor of my professional life and I'm privileged and blessed to have been part of the magic.

I predict bookstores will go the way of recordstores - they won't vanish, but they are getting less commonplace. Printed books still have a place in the world and I like to think they will continue to have one for the duration of all our lifetimes. As to my warning, I had to give one. Can't have poor Carrie suckered in by guys like me, er, I mean, "them"...

Even though I hate social media when it comes to keeping up with my 13yo daughter, I LOVE it as an author :-) Funny guest post!

You and Walt share birthdays and Nancy S. Thompson?... That sounds very scandalous! I don't think you should post that in public. ;-)

I can't imagine. If I had kids, I think I'd just become Amish and claim the Internet didn't exist. It's a myth.

Eric, I had a hearty laugh out loud at, 'Crappy Self-Published Books'--though I will suggest that the majority of those you mentioned don't actually know you're talking about them. They've published their treasured gems, fully believing in their sparkle. They can't see the mountain of mistakes because of the glare. Just saying ;)

Nice to see the changes from one who has 'been there'. Interesting stuff and thanks, Carrie, for hosting such an informative guest :)

It is crazy how publishing has changed over the years. I for one am happy I can purchase books from my computer and they just ship to my front door. Pretty spiffy. :D

Such a fun post. Thank you Eric, and Carrie. I sent my first query in 2002, and talk about change! (Oops, just dated myself.) Change is a good thing though--if you can keep up with the trends, and I'm loving the direction they're going. (Minus the loss of bookstores. A moment of silence, please.)

Great post... indeed so many changes have taken place. I so miss all the book stores:(

"Less Bookstores" Indeed. Barnes & Noble may be in a death spiral.

i was totally snickering the whole time! any man that can say dillweed tastefully and with true tack...gotta love it!

There are definitely negatives and positives of publishing back then as well as today. I definitely think the positives of today lean more in favor toward authors than any other time.

I agree wholeheartedly. You're right. They have no idea. A wise man once said, "Stupid people will never realize it when you point out they are dumb." I'm quoting myself, of course.

And thank you for perceiving me as informative.

You're welcome. Glad you enjoyed it. Evolve or die - everyone born after 1970 seems to innately grasp that.

I have faith in Barnes & Noble. They seem to be playing things smart. They are closing a ton of stores over the next few years, but they had almost 700 stores in the United States. Even with a high demand for printed books, that seems like way too many to sustain itself.

Thank you ma'am. I can say far many other things distastefully too!

I agree. In the past 5 to 10 years, distribution opportunities have become better than any other time in history. The one downside is getting anyone to pay attention to your shotglass of novels in an ocean of books.

great guest post! sad about the negatives, love the def of fantasy & sci fi! and the positives i'm still getting used to.

worst part of ebooks, no one can see the cover of what youre reading...

Sounds like a funny guy to me. I always thought it'd be fun to write a book called "101 Ways to Piss Off Your Waitress." o_O
The industry has changed completely from when I first started writing seriously. I cant believe we had to snail mail mss and SASE for correspondence. Ugh. :)

Thanks! As to the eBook problem, print it out and tape it to the back of your Kindle! Problem solved!

Funny guy? I'm funny how, I mean funny like I'm a clown, I amuse you? I make you laugh? What do you mean funny, funny how? How am I funny?
Kids today won't even know what a SASE is.

Of all the changes I love, the one I love the most is this: that the ebooks opened a hole in the wall so that writers can by-pass the gatekeepers to get published.

Authors have been able to bypass the gatekeeprs for a very, very long time. eBooks have opened the gates, but some of us had already been chillin' in the castle years before the eBook keys existed.

The list of things that are better now is great. I know Amazon is the reason a lot of Mom and Pop bookstores are out of business, but I do love how easy it is to click and read e-books!

Amazon has 97,000 employees. If the average "mom and pop" bookshop had 5 employees, that means Amazon keeps food on the table for the equivalent of 19,400 small bookshops. That doesn't seem so bad to me.