Yay! My as-of-now pub sister, Nicky Wells, is here to celebrate the cover reveal for her third book, Sophie’s Encore. Read on for:

Her rock star is waiting in the wings, but will he get a second chance?

It’s all change for Sophie Jones—only this time, there is more at stake than just her happiness.

Rock star extraordinaire, Dan Hunter, has been her patient and caring friend through the highs and lows since her wedding day, but now he figures it is time for her to start over. By stealth, the rock singer draws Sophie into the behind-the-scenes work for his band’s latest album. Through the days and weeks spent together at the mixing desk, Sophie discovers whole new horizons for her life, yet before she can even begin to explore them, she faces the very real threat of losing her rock star for good. 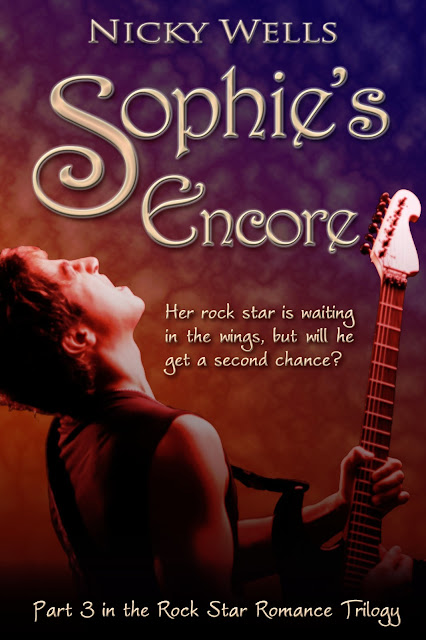 Gorgeous, right? And if that weren't enough, she's given us a sneak peak!

My bedroom door opened slowly and Dan crept in. All thought of sleep forgotten, I flicked the light back on and was met by an astonishing sight. There was Dan, the rock star, legend for his antics on and off stage, clad in a demure pair of checked pajamas with a button-up top and a mismatched, stripy dressing gown. His feet were stuffed into fluffy slippers, and he clutched a bottle and two glasses in his hands.
“Come on,” he whispered. “Dinner is served.”
I giggled and left my bed, grabbing my own stripy dressing gown and a pair of thick socks.
“What are you doing?” I breathed into his ear, but he simply took my hand and pulled me down the dark corridor toward the open-plan lounge.
“Have a seat,” he invited me and gestured at the dining table, which was once again laid, although only for two, complete with candles and napkins.
He set down the bottle and glasses and scurried off to shut the lounge door. While he busied himself in the kitchen, I basked in the heat from the fire which Dan had re-stoked, and observed my rock star with some degree of amusement.
Within a few minutes, he brought a dish of smoked salmon bites to the table, followed by olive bread, a cheese board, various cold meats, olives, pickled anchovies, and prawns with some sort of aioli dip. He popped the cork on the bottle of champagne, poured two glasses, and sat down, satisfied at last.
“Now we can eat,” he announced. “Tapas. What do you think?”
I raised my glass. “Cheers,” I giggled. “So that’s what you meant earlier. I think it’s amazing. It’s like a midnight feast. I’m just waiting for matron to discover us and give us detention. Why all the secrecy?”
Dan speared a prawn and pointed it at me. “Well, for one, as you say, matron will certainly come and give us detention. Peter is very strict on my sleep regimen, you see.” He dipped the prawn into the aioli before popping it into his mouth. The beatific look on his face and his scrunched up eyes suggested he was enjoying this humble treat far more than was warranted.
He swallowed and cleared his throat. “And for another, I’m on a strict diet. Every last bit of cheese gets weighed, the carbohydrates counted, the sugar added up. It’s really tedious.” He grimaced.
I helped myself to some bread and salmon. “Tedious indeed, I can see that. But why? I thought you were supposed to eat lots and get better.” I chewed greedily, my tummy having given an impressive rumble.
Dan speared another prawn and added a mountain of cheese and bread to his place. “Bliss,” he murmured before explaining further. “I’m supposed to eat healthy, not lots. So Peter has taken it upon himself to reform the bad eating habits of a lifetime. Bless him, it’s what he’s paid to do. I’ve been going along with it, and I have to admit, I’m feeling pretty good. But…”
He grinned his school-boy grin, took a big mouthful of food, washed it down with a large gulp of champagne, and finished his thought. “Well, it gets boring. And I wanted to do something special with you. On my own.”
I burst out laughing, but quieted down when I saw the alarm on Dan’s face.
“Sorry,” I whispered.
“Peter’s bedroom is right next door there,” Dan whispered back. “And he’s a light sleeper.” He pointed his finger, and we sat in silence for a minute, straining to hear.
“I think we’re okay,” Dan finally concluded and resumed eating.
I giggled softly. “Naughty, naughty, us.”
“Ha, we’re not naughty yet,” Dan shot back, speaking softly as well. “I was working up to that part.”
He winked, and my heart skipped and jumped. He didn’t mean—he couldn’t mean what I thought he meant?
“What do you mean?” I bumbled, hoping for clarification, but Dan was enjoying himself.
“All in good time,” he teased. “Let’s finish our meal first.”

Nicky wants to share her excitement about this cover reveal and upcoming release with you! She’s offering a giveaway — Enter for your chance to win:

GIVEAWAY CLOSES 15 AUGUST AT MIDNIGHT BST.
The small print! Entrants must be aged 18 or over. Giveaway is open internationally. Winners will be drawn via Rafflecopter. GOOD LUCK!

Oo, hold on! Nicky just told me her first two books, Sophie's Turn and Sophie's Run, are on sale for $0.99 (or equivalent) each to celebrate the cover reveal! Hurry ~ limited time only! 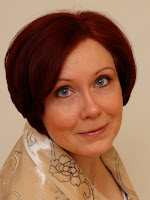 Like Sophie, her leading lady, Nicky loves listening to rock music, dancing, and eating lobsters. When she’s not writing, she’s a wife, mother, occasional knitter, and regular contributor to The Midweek Drive show on Lincoln’s Siren 107.3 FM. Rock on!

You don't want to lose your rock star!
Congratulations, Nicky.

No, you certainly don't! Sophie has a lot of decisions to make in this last instalment... Thanks for your comment, Alex, nice to see you here. Rock on!

Good luck to Nicky and rock on!

Congrats Nicky and I love the tagline on the cover the most.

Congratulations to Nicky. Awesome cover and excerpt. I've always had a thing for rock stars.

Haha, at work for a conference prepare, someone said we needed a guy who was tall, dark, and handsome to be a class substitute. I provided a picture of your Strength cover. They had to pick themselves off the floor. Now if we could really get him to teach the class...

If you manage it, I'll fly across the country to take that class. I don't care what the subject matter is! LOL

That's a rock and roll'n cover! Congrats to Nicky! :)

Good on you for sharing the writerly love. If we don't support each other, who will? Well-written excerpt, to boot.

What a sweet excerpt! Congratulations, Nicky.