I'm so happy to share this cover reveal with you guys! Not only is Juliana one of my "sisters" over at the Alley, but she's a close friend. So, without further ado... 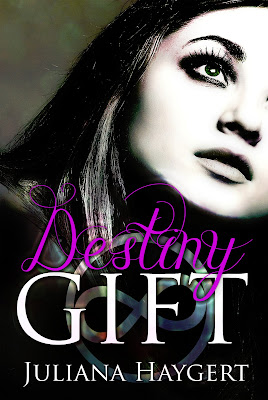 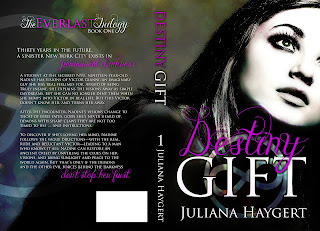 A student at the secured NYU, nineteen-year-old Nadine has visions of Victor Gianni, an imaginary guy she has real feelings for. Afraid of being truly insane, she explains the visions away as simple daydreams, but she can no longer deny them when she bumps into Victor in real life. But this Victor doesn’t know her, and turns her away. After the encounter, Nadine’s visions change to those of eerie fates, gods she’s never heard of, demons with sharp claws they are not too timid to use … and instructions.

To discover if she’s losing her mind, Nadine follows the vague directions—with the real, rude and reluctant Victor—leading to a man who knows it all: Nadine can restore an ancient creed by unveiling the clues on her visions, and bring sunlight and peace to the world again. But that’s only if the demons and the other evil forces behind the darkness don’t stop her first.

While Juliana Haygert dreams of being Wonder Woman, Buffy, or a blood elf shadow priest, she settles for the less exciting—but equally gratifying—life of a wife, mother, and author. Thousands of miles away from her former home in Brazil, she now resides in Connecticut and spends her days writing about kick-ass heroines and the heroes who drive them crazy.
WEBSITE  |  GOODREADS  |  FACEBOOK  |  TWITTER

Juliana, that is striking!!

Thanks, sister, for having me over! <3

Beautiful and intriguing. Best of luck!

How great to be able to feature one of your writer friends. Good luck, Juliana.

Yay, Juliana! Now I have a new cover to show on Monday. :)

It's so pretty! Congrats, Juliana!

I love how the purple pops out. Really draws you in.

The cover is kind of a mirror image of how Juliana is leaning. (Covers don't really resemble their author's, but it freaks the authors out to suggest so.)

I love the cover. And it sounds like a great story. :D

Cool cover. Cool story blurb. And awesome author bio. I love the part about kick A heroines and the heroes who drive them crazy! Love it :)

Woo, that's a fabulous cover! I'd be stoked!