The Princess of Las Pulgas

...Well, kind of. You know I can't pull those off. Instead, I'm going to hit you with a book description and a few bullet points! 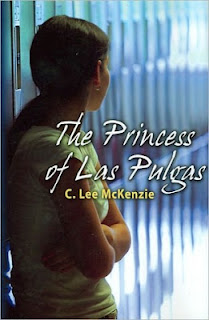 "After her father's slow death from cancer, Carlie thought things couldn't get worse. But now, she is forced to confront the fact that her family in dire financial straits. To stay afloat, her mom has had to sell their cherished oceanfront home and move Carlie and her younger brother Keith to the other side of the tracks to dreaded Las Pulgas, or "the fleas" in Spanish.

They must now attend a tough urban high school instead of their former elite school, and on Carlie's first day of school, she runs afoul of edgy K.T., the Latina tattoo girl who's always ready for a fight, even on crutches. Carlie fends off the attention of Latino and African American teen boys, and one, a handsome seventeen-year-old named Juan, nicknames her Princess when he detects her aloof attitude towards her new classmates. What they don't know is that Carlie isn't really aloof; she's just in mourning for her father and almost everything else that mattered to her.

Mr. Smith, the revered English teacher who engages all his students, suggests she'll like her new classmates if she just gives them a chance; he cajoles her into taking over the role of Desdemona in the junior class production of Othello, opposite Juan, after K.T. gets sidelined. Keith, who becomes angrier and more sullen by the day, spray paints insults all over the gym as he acts out his anger over the family's situation and reduced circumstances. Even their cat Quicken goes missing, sending Carlie and Keith on a search into the orchard next to their seedy garden apartment complex. They're met by a cowboy toting a rifle who ejects them at gunpoint from his property. But when Carlie finds him amiably having coffee with their mom the next day -- when he's returned her cat -- she begins to realize that nothing is what it seems in Las Pulgas."

See, a couple months ago, I won a copy of The Princess of Las Pulgas by C. Lee McKenzie. (I know, I know. I love her, too!) Um, can I just say it was amazing? Here are five things I loved about it:

I know Lee! And I've heard great things about her book, too. I'll have to put it on my TBR list. And I think you pulled off your own version of a review quite well!

Nothing wrong with a bullet point review. I've done them before!

I love the movie description of it being a cross betweeen Save the Last Dance meets Dangerous Minds. Definitely sounds like a good read.

Wow, this is probably a book I wouldn't have been interested in based on the title and cover but I want to read it after your *review*:):) And my sister force-lends me books alllllllll the time, lol. Let's just say we have different tastes.

Thanks, Angela! Those two movies immediately came to mind while I was reading it. (Along with this song. ) Yep, definitely a good read. :)

It sounds like a great read. I have another book by the author, Sliding on the Edge, and I'd like to read this one as well.

I tagged you on my blog.

This blurb really hooked me. I'm going to have to read this (eventually! Argh, my TBR list is HUGE!)

Carrie, you are amazing. You say you don't do reviews, and then you turn around and do this! Even I want to read Princess after all that you've said--I mean, Save the Last Dance and Dangerous Minds!

Thank you for dedicating this post to Princess. She is very appreciative! Me, too.

Oo, I'll have to look into her other works. :) Thanks for stopping by, Medeia!

I know what you mean. My TBR list is getting ridiculous, and it's only March!

Thanks for stopping by, Lydia! :)

Thanks, Lee! I'm glad you enjoyed it because you, my friend, are a writing rockstar. :)

Carrie, you rock. Plain and simple. I'm always intrigued with what you have to say... whether it's a rant, a book blurb, or especially an excerpt of your work *winks*

This sounds like a great read! Your insightful list made it easy to agree that TPOLP is a TBR after A to Z! Great job Carrie and congrats to Lee! Julie

At first, I was thinking nah, this isn't for me. But then I read further. Wow. Not what I was expecting.
Great post, Carrie! = )

Hi Cassie Mae. Would love to hear from you if you read Princess.

Hi Nancy. Thanks. Carrie really does a great job on her blog--reviews or no reviews. Love my visits here.

I read a lot of blogs, and I love the bullet points. I get the information quickly and yet it's satisfying. I'd vote for more.

Me too! I wish I'd thought of that!

Bless those sister! We could form a club.

I still have a very soft spot in my heart for Sliding on the Edge. I guess first books are like that. They become something more than just another thing you've written.

I hear you about the TBR list. Mine would trail across the room and out the door if I unfurled it. I need a vacation and a palm tree!

She does keep a great blog, doesn't she?

Ah, yes, the A to Z! Do you realize April is almost here? Blogging every day? Cringe. Cringe.

I hope you'll let me know if Princess is a good read.

Hah! I feel like we have some kind of secret writers' code! *grins*

Thanks, Melissa! I'm sure you'll enjoy it. :D

Thanks, Morgan! I love hanging out at your blog, too. :D

sounds like a potential award winner that the kids will read in school! i will tell my english teacher friend about it!

I found this at my library last year and really enjoyed reading it.

I love Lee's blog and Princess of Las Pulgas is high on my TBR list. Isn't it great when you win a book and fall in love with it?

That's a great idea, Tara! :) Thanks for stopping by!

Lucky! I have yet to find any of my author friends' books at the library. For some reason, it sounds like a really cool experience to me. :)

It really is! :) Thanks for stopping by, Leslie!

It sounds like a great read. I definitely need to add this to my TBR pile.

It is! :) Thanks for stopping by, Talli!