Continuing with today's theme, we're going to celebrate the release of Jessica Therrien's debut novel, OPPRESSION! All together now...

It's the first in her YA paranormal romance/adventure series, CHILDREN OF THE GODS, and promises to be very, very good! Ready to hear more about it? Here's the book description: 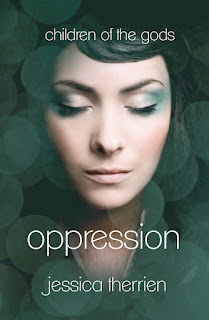 OPPRESSION
(Children of the Gods #1

Elyse knows what it means to keep a secret. She's been keeping secrets her whole life. Two, actually. First, that she ages five times slower than the average person, so that while she looks eighteen years old, she's closer to eighty. Second, that her blood has a mysterious power to heal.

For Elyse, these things don't make her special. They make life dangerous. After the death of her parents, she's been careful to keep her secret as closely guarded as possible. Now, only one other person in the world knows about her age and ability.

Or so she thinks.

Elyse is not the only one keeping secrets. There are others like her all over the world, descendants of the very people the Greeks considered gods. She is one of them, and they have been waiting for her.

Among so many of her kind, she should not be very remarkable--except for the prophecy. Some believe she will put an end to centuries of traditions, safeguarded by violence, which have oppressed her people for centuries. Others are determined to keep her from doing just that. But for Elyse, the game is just beginning--and she's not entirely willing to play by their rules.

Sounds great, right? How about a little preview? Click here to read the first few pages of chapter one. :) Just make sure you're back here next Monday (03/05/12), when Jessica stops by as part of her OPPRESSION blog tour. It'll be the first interview here at SYAW. Are you excited? I know I am! :)


So, sit back and enjoy yourself; put your feet up on the coffee table (I won't flip out this time, I promise!); and get ready to win some awesome prizes! This is from Jessica's page:


Here's What You Can Win:

How Can You Win?


To be entered to win these prizes you can do any of the following:

1. Tweet about the release of Oppression using the hashtag #Book1OPPRESSION.


Example: Celebrate the release of Oppression (Children of the Gods #1) by @jessicatherrien #Book1OPPRESSION #YA Available NOW!


2. Facebook - tag @Jessica Therrien (Author) about the release of Oppression.


Example: Celebrate the launch of Oppression (Children of the Gods #1) by @jessicatherrien! The e-book is on sale now for NOOK & Kindle for only .99 cents!

Example: Spread the word for prizes! Today is the official release of Oppression (Children of the Gods #1) by @jessicatherrien

I don't know if I get more points for doing more, but I did 1 and 2, and I'm off to do 3! Congrats on the book launch! The book is beautiful, and it sounds terrific!

Congratulation on the release. Oh, I LOVE the cover. :)

It would be pretty cool if one of my writing notebooks had the cover of a novel on the front... I'm just saying... (hint, hint, Jessica!)

Thank so much for helping me spread the word Carrie! Can't wait for the interview :)

SQUEEE is right! I'm so excited for this! The books sounds amazing and the cover is beautiful! Congrats Jessica!

I normally respond to every comment, but this is Jessica's day. :) Thanks for stopping by, everyone! You guys rock!

Squeee! I didn't realize I could get this for my Nook. I'd just put it on my Goodreads to read list. Now I've bought it!

Wow, sounds like a great read:) And what a great way to support each other! Will Tweet about it now . . .

Thanks so much...and yes you do get more points ;)

Thanks Ciara! I love the cover, too :)

Thanks Leigh! You're awesome :)

Awesome!! YAY! Thanks so much.

I twittered, but I'm also putting it on Pinterest.
thanks, Carrie.

So excited for Jessica and can't wait to read my copy!

Hooray for Jessica and her book! It looks great!

The premise of Oppression sounds great! Love the cover too.

Oooh, I like this premise. The world-building is going to be fantastic, I can just feel it!